the hungry whore grumbles I. – the SYAA’s new members’ exhibition 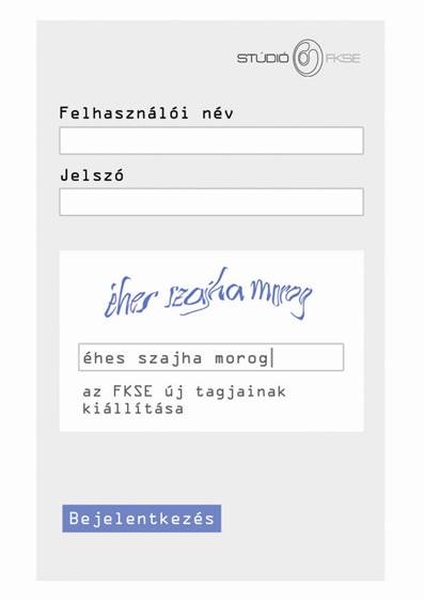 It is a well-known phenomenon, when a book, magazine etc. spends a long time in a shop-window; its cover gets faded, and slowly converges into a blue-ish entropy. This is the process of the overdevelopment, in which the picture exceeds the zenith of its career, the point, where – in the moment of the development or appearance – the outlines are sharp, the contrasts are strong, the colors are firm. A few years before, I experimented to make the exact opposite process on the cover of a magazine, unsuccessfully: it was about the advanced future, and –by the plans – the accordingly used (tempered) covers’ colors would have gained their ideal meaningful state with the help of the weather’s adversity at the advanced moment in the future.

Preparing for the first exhibition of a SYAA-generation, we don’t really have any other option than to advance the ideal state of a moment in future. The role that the Studio can fill in the new members’ life can be drawn in the contrast and convergence of ideas. The expectations are not without all kinds of conflicts: community, inspiration, carving for information on one side, routine and the pressure of conventions on the other. Pessimistic, but ambitious visions that will gain their ideal meaningful states at a moment in future, along with this hesitant text and the exhibition which is searching for its outlines.

What are the antecedents of these future idealistic states? Where do our expectations come from? How can the new SYAA-generation form a community?

Expectation without experience is impossible. Experience is no other, than “past in the present”, expectation is “the visualized future”. We can collect experiences, because as experiences, they are repeatable. There need to exist stable historical structures, which make the repeatable experience-collecting possible. We must recognize the existing, the constantly changing and the ever new, which can only be done, if we recognize the roots, which the permanent structures hold on to. The yearly debut exhibitions of the new members and the SYAA is an alike permanent structure. All of these are small parts of a process.

A Reinhart Koselleck, one of the most notable post-war philosophers, said: A minimal amount of pre- and post- can create an intellectual whole, that makes the occurrences into events. We can expand the connections of the events to however wide we want, the circle of the before and future occurrences – the consistency must always come from the continuity.

Therefore, the (art)historian can not do anything else, than to exert a prognosis of the future by leaning on the past. Making up a prognosis means that we change the state that we are currently in. We are expecting something else from the future. However, you can only wait in the present. The desired expectations can be overwritten, as the gained experiences multiply. The goal of this present exhibition is exactly to multiply these experiences, with which the future can be changed. And these together-gained experiences, the collectively created vision, and the voicing of the positive aims form a community from a group of individuals.

It is not an exaggeration to state, that participating in a SYAA exhibition – and to become a member of the Studio – has become inevitable for the young artist-generation, because the center of the inland progressive endeavors is the Studio of Young Artists’ Association. The association – with a more than half-a-decade past – has gained 24 new members. One of their opportunities is to join the community by participating in the debut exhibition; because during the preparation and transaction, many unforeseeable issues surface, and in the resolving process – in ideal circumstances – the individuals organize themselves into a group. This is hardened by various conditions; on one hand, the artists and the members, who deal with the organizing, and theoretical part of the exhibition are divided for practical reasons, on many occasions haven’t met before; on the other hand, during the preparations, they had to deal with the plurality of the of the styles and genres, which naturally occurs when a community is formed randomly. The only mutual point between the exhibitors was that the Studio accepted them based on their portfolios. A picturesque example for the inability to agree or make decisions during the organizing process is the title, which was randomly drawn from adjectives, nouns and verbs. The issues, in the process of resolving resulted in such absurd, and the same time exciting possibilities during the preparation of the exhibition.