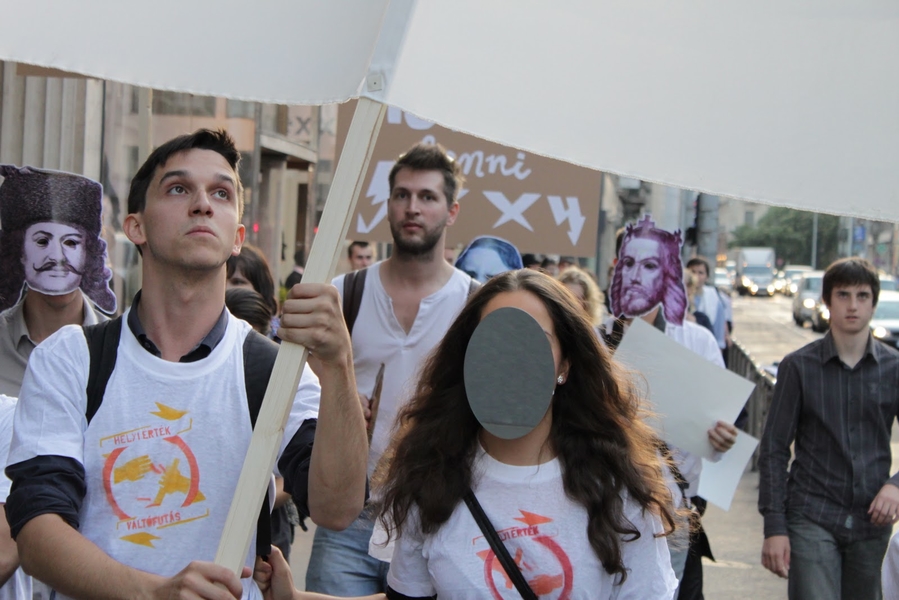 There is a lot of talk about the crisis of values recently. The many problems and issues we face before us – whether social, economic, political, cultural, environmental or identity, that touch all of mankind or just the quality of our everyday relationships – may perhaps be traced back to a lack of direction: we can not find the our own place, or misplace things, thus our value system is distorted.

Serious tensions, strong movements, large-scale changes indicate the process of rearrangement in our world, as ideologies, perceptions, customs and powers, whole systems change, replace each other, or if your like, give the baton to one another. Our groups goal is to find process and context, to rearrange, place and rethink ourselves.

In terms of approach, interpretation, method and technique, we have approached this set of questions in many ways, but the central thought or problem is markedly displayed in the individual works of each of us. We also create a joint work: an installation based on the motto of the baton, and the public action linking the three locations as a parade. The joint works, that is the installation and the accompanying pictures, with the video documentation of the community action are planned to be shown in Roham’s exhibition hall and the individual works in the Labor and Telep galleries.

As for these latter works, there are those for example, who approach the notion of local value from individual and social responsibility, raising questions such as “How can community problems be individually exposed? Incidentally, can any reading be considered revealing? And if so, why is this necessary? ” Others are concerned with the problematics of reality and visibility, more specifically with the other side of the mirror, and yet others with in the contexts of the processes: “We get the baton from someone and we pass it on. It has no absolute value, only local, because without context and context, the notion of value can not be interpreted.”

Through simultaneous representation of the representation of our national, cultural self-image and expression of our consumerist life style, the relations between different identity spaces and economic, geographic localities and globalities are hinted at in connection with local value.

In another approach, the concept of “mutyi” puts the whole issue in a different light: “The mutyi: subordination of public interest to the interest of a select few only. The mutyi: abusing public trust, but at the same time mutyi is a social snare, because where everyone does mutyi, one how does not would be disadvantaged (…) Mutyi florishes everywhere where anti-mutyi laws are made by those invested in muty. The so-called. “Local value” – mutyi.”